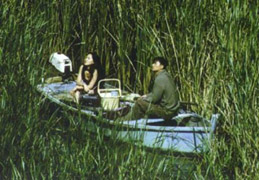 Im Kwon-Taek’s Chunyang (2000), a screen adaptation of an old Korean folk tale (1), was the first Korean film to have been included in the official Cannes competition, in the year 2000. This event signalled the predominance of one of the most vital Asian cinemas on the world cinema stage and made ‘official’ its meteoric rise. At the time when revered Japanese and Hong Kong directors were taking their chances in Hollywood, Korean filmmakers, Hong San-Soo, Kim-Ki-Duk and others, were emerging at the centre stage of film festivals around the world. The recently gained prominence of Korean cinema, which has been awaited for some time, was confirmed at this year’s Melbourne International Film Festival (MIFF). The following is a brief overview of the selection of Korean films at MIFF 2001, and a look at various other titles omitted from the selection, in order to acquaint cinephiles with this new and inspiring current in Asian cinema.

Hong San-Soo’s third film, Virgin Stripped Bare By Her Bachelors (Oh! Soo-Jung, 2000), was one of the most anticipated films at this year’s MIFF. Constructed as a memory play, Virgin Stripped Bare.combines the separate recollections of a love affair by its two main protagonists: a staff writer for a production company, Soo-Jung, and an affluent gallery owner, Jae-Hoon. The tender and passionate beginning of the love affair takes another turn when Jae-Hoon realises that the young woman is still a virgin. Structured as a series of repeated and varied scenes, the story reveals numerous inconsistencies about the nature of their relationship. Jae-Hoon’s recollections of the relationship are contradicted by Soo-Jung’s versions of the past.

Shot in black and white, Hong San-Soo’s film is situated in Seoul, a bleak post-industrial metropolis of broken promises and fallen expectations. The affair begins with the first encounter between the two in Seoul’s old town, Insa-dong, and continues in small cafes, polluted parks, crammed offices and hotel rooms, where the two lovers meet displaying an almost Godardian sense of unease. Their tense conversations reveal a conflict between traditional values and the new, challenging voices that question such values, in particular patriarchal norms, which persist in Korean society. Yet, more importantly, they demonstrate the impossibility of fully understanding events in our personal histories that get distorted and varied with time and shifting perspective, capturing the purpose and essence of memory.

Screened as part of the sidebar, Shadows: The Dark Side of the Cinema, Kim-Ki-Duk’s film, The Isle (2000), was one of the highlights of the Festival. The Isle is about a runaway policeman who finds refuge at a fishermen’s cabin on the lake and falls in love with a woman who runs a haven for criminals and prostitutes. Its bleak poetry and confronting images provoked an instant response from the audience. The director, who studied painting in France in the early 1990s before embarking on a film career, displays a fascinating sense of visual rhythm and composition. He uses long, static and meticulously composed shots to tell the story of a relationship between two loners. Tracing the gloomy everyday life at the small fishermen’s haven, and capturing atmospheric shots of fog and rain, Kim-Ki-Duk enhances the dramatic tension and heralds the events which inextricably bind the two troubled characters. When their relationship evolves into a sequence of bizarre, violent confrontations, culminating in betrayal, revenge and almost ritualistic self-inflicted horrific wounds (the central poetic motif of The Isle), Kim-Ki-Duk’s photography becomes even more powerful and engaging. The intelligence and style of his cinematic storytelling and his Freudian attachment to water draw numerous correspondences with Kaneto Shindo’s masterpiece, Onibaba (1964). The performance style of his cast, who presented their characters convincingly without falling into melodramatic exaggeration, bestowed this dream-like tale with a special quality.

Shown in the same programme, Park Ki-Hyong’s Secret Tears (2000) is a film that also examines a relationship within the framework of the genre of the fantastic. Its story centres on the mysterious affair between a man and a woman that becomes dangerously uncontrollable, mainly because the woman bears paranormal powers that emerge immediately after a traffic accident and that have unpredictable and inadvertent consequences.

Unfortunately, MIFF audiences could not see Kim-Ki-Duk’s latest feature, Real Fiction (2000), a film about a street artist who inflicts revenge upon a group of thugs who harass him. It was conceived as a cinematic experiment, shot in real time, and maintaining the dramatic unities of time and place. Real Fiction (original Korean title: State of Reality) was filmed in just over three hours with the help of twelve sequence directors and 120 staff, using eight 35mm cameras, two 35mm steady-cams and ten digital cameras.

In the latter half of the last century, Korea was viewed in the West as a country of relative prosperity and questionable human rights, ‘a bad behaving ally’ with a mission of preventing the peril of communism. Contemporary Korean films are often bereft of even the most remote references to this supposedly noble mission of the ‘gate keeping of democracy.’ Instead, in these films, Korea is portrayed as a dismal and depressive place, a ruthless and disintegrating society in which the gap between the rich and the poor remains ever growing. 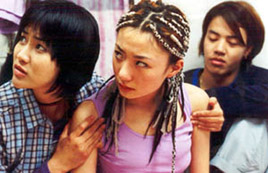 Im-Sang-Soo’s second feature, Tears (2000), centres on a group of teenagers growing up in the urban slums of Seoul’s Garibong-Dong, the squalor of high rise buildings and no-go zones, in which the poor and the underprivileged struggle to make ends meet. The pronounced social note in Im-Sang-Soo’s film instantly reminds the viewer of Fruit Chan’s Made in Hong Kong (1997). The endeavours of his heroes, engaged in petty crime and prostitution, to remain independent and maintain a sense of self-sufficiency are constantly thwarted by circumstances beyond their control. The directness and lack of inhibition that characterises the performances throughout Tears, results in a staggering authenticity.

One of the Korean action thrillers to play at the Festival that drew attention to social themes was Ryoo Seung-Wan’s first feature, Die Bad (2000). A mosaic of four stories – a short action film, Rumble; an action-horror, Nightmare; a mockumentary, Modern Man (also translated as Our Contemporary); and the black and white gangster film, Die Bad – this film engaged audiences primarily because of its idiosyncratic narrative and visual styles. The first two episodes, Rumble (shown in Australia on Eat Carpet, SBS) and Modern Man won awards for short film at Korean film festivals and represent the core of the film’s narrative. The first story focuses on an incident at a pool bar in which a young student at a local tech school accidentally kills another boy and the second follows him seven years later after his release from jail. The following two, disproportionately longer episodes, are derived from these stories, following the leading protagonist on his tragic, violent path. The film is situated in the working class areas of Seoul; the schoolyards, pool bars, dark alleys and parking lots of the squalid metropolis. The director composes a mixed bag of inconsistencies, typical for a first low budget feature, but manages to capture the audiences’ attention with the explosively paced visuals, performances by his predominantly young cast and marvellously choreographed action scenes. The obvious cinematic influences (Jackie Chan, Ringo Lam and Quentin Tarantino) are complemented by a deceptively simple tale with strong socio-political overtones. The director suggests that his teenagers who belong to the Korean impoverished working class are bereft of choices in their adult lives. Marred by permanent social turbulence and existential insecurity, and frustrated by their inability to communicate with their friends, parents or teachers, Ryoo Seung-Wan’s characters search for enlightenment and purgation in the world of indiscriminate violence.

Pomildong Blues (Kim Hee-Jin, 2000) and Segimal (Neung-han Song, 2000), not screened at the Festival, also bear a potent social note. An ostensibly simple love story between a labourer and a nurse forms the core of Kim Hee-Jin’s 16mm feature debut. The film is situated in Pusan, Pomildong, the traditional working class area famous for its markets, cinemas, restaurants and refugee centres from World War II that provides a strong social and historical context for Kim Hee-Jin’s narrative. The film’s musical, comedy and fantasy elements within a seemingly traditional, old-fashioned love story engaged audiences at the 5th Pusan International Film Festival (2). An omnibus of four episodes, Segimal follows the destinies of a scriptwriter, a call girl and a college lecturer, exploring the dilemmas and contradictions of modern day Korean society at the end of the millennium. The film examines the lethargy and moral malaise (the titles of the episodes are Moratorium, No Ethics, Moral Hazard and Y2K) of its confused and depraved protagonists who are forced to make ethical compromises, struggling with a lack of self-confidence and a sense of degradation.

Korean filmmakers have frequently examined the women’s perspective in a traditional patriarchal society. Set in an all girls high school, Memento Mori (Kim Tae-Yong, Min Kyu Dong 1999) examines the friendship between two rebellious students that ends in a suicide. A series of strange events at the school grounds is strongly linked to the psychokinetic powers of the surviving girl who becomes a threat to the whole school community. Similar to Park Ki-Hyong’s horror debut Whispering Corridors (1998), Memento Mori makes constant references to the oppressive educational system in Korea, which favours mediocrity and punishes those who challenge the traditional social norms (3). It has been pointed out that the impressive cinematic debut of the directors Kim Tae-Yong and Min Kyu Dong reveals numerous correspondences with the films of Dario Argento, yet the ambience of a monosexual school community and the strong criticism of social conformity that besieges the young generation of Koreans reminded me of Kitano’s Kids Return (Takeshi Kitano, 1996) and Kitano’s criticism of the narrow and uninspiring visions and limited possibilities offered to his young and uncompromising heroes.

Other titles to focus on women’s experiences include Yeo Kyun-Dong’s visual essay, My Heart (2000), about a woman who, after a series of tragic events, rediscovers her identity and her child, and Park Chul-Soo’s Bongja (2000), about a middle-aged woman who discovers her sexuality through a relationship with a teenage girl.

Other notable Korean titles that screened at this year’s MIFF include the post-cold war melodrama, Joint Security Area (Chan Wook Park, 2000), a tale about a sadistic mass murderer, Tell Me Something (Chang Youn Hyun, 1999), and comedy about a disgruntled office worker who becomes a wrestling champion, The Foul King (Kim Jee-woon, 2000). Along with the traditionally strong presence of Japanese titles in the Festival (the only omission this year being Oshima’s Gohato [2000]), the selection of Korean films was an invigorating section of this year’s MIFF. The selectors’ regional focus could in the following years shift to the current directions in Taiwanese, Vietnamese, Philippine and Indonesian national cinemas. A number of quality films produced in South East Asia last year indicate that this region will in the foreseeable future remain at the helm of new and exciting tendencies in world cinema.