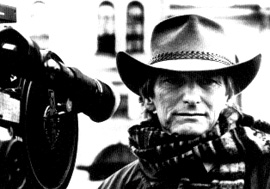 The very fact this 16-minute documentary is called People Make Papers suggests that it is a response to those forces which equate increased workplace automation with progress. In other words, this short film contests that view of history in which people, much less “the masses”, barely feature. Fred Schepisi’s short film provides an overview, and for some of us, an insight, into the workings of newspaper production in the post-Fordist era. Though we might never have doubted that humans are involved with the creation of daily news, we might be guilty of underestimating the crucial decision-making that facilitates large-scale printing press operations. By devoting as much time to the processes required on the shop floor – typesetting, the laying out of proof-sheets, loading print barrels, the tying of newspaper bundles ready for delivery to newsagents – as to those “upstairs”, the editorial, reporting and managerial activities, Schepisi demonstrates the importance of all parts of the daily newspaper-making process. Yet, as documentary his film serves the goals of social idealism more than those of realism, despite attempts to utilise the devices of cinéma-vérité.

Beautifully photographed in black-and-white by Peter Purvis and edited by Brian Kavanagh, the production process is depicted as dynamic, continuous and busy, never hindered by the breakdown of humans or machinery. Fair enough too. Made on behalf of The Age at a crucial time in its management and ownership history (only a year later, John Fairfax & Sons would assume partner ownership), we are looking at how a paper runs on a good day (1). As such, the men on the shop floor, distinguished from their peers upstairs by uniform and soundtrack, are immaculately clean, professional and calm in the face of the threat presented in the opening sequence, where a machine operator opens a newspaper and remarks:

The documentary formally sustains this optimism throughout by depicting the amount of personal decision-making and site-specific nous required of each worker to ensure smooth operations. If we shift our frame of reference though, we also become privy to a vision of things that don’t occur in this ideal workplace, gaps that have proved to be sources of tension in the newspaper and wider world subsequently. To be more specific, the cheerful portrayal of the delineation between gender and “collar” is betrayed by the incursion of machines on personal space.

In this depiction of The Age‘s mid-1960s office, journalists, management and editors are mostly men. Aside from the editor, they all have typewriters on their desks but the workplace accommodates a substantially sized typing pool that consists entirely of women. There is something almost horrific in the depiction of the typists busily carrying out their work in small booths, each the equivalent in area of a schoolroom desk and sealed off from the others by chipboard dividers at the front and on either side. In a room similar to the size as that occupied by the 18 or so journalists, 44 (or so) women type busily, constantly. Certainly, space and efficiency are of concern here but that particular distinction between the typist and the journalist pools bears some analogy to free-range versus battery farming. The closest thing we’ve got to that set-up currently is the call centre – but at least call centre workers have got their own phones!

To say there is no traffic between “upstairs” and “down” is a little misleading since the film makes clear, through the linear contiguity of its time frame, that phone calls are made between the levels at crucial moments (2). A sequence depicting the end of the afternoon shows a couple of the “suits” from upstairs consulting with press operators. On days given over to a less organised trickledown of information production and dissemination, there may be more phone calls, more consultation and more last minute requests. Generally, though, it seems the staff “upstairs” do not come below to discuss operations with their “downstairs” colleagues. Meanwhile, we are given the impression that the journalists communicate and congregate in social as well as professional capacities. By depicting these demarcations without seeking to explain them, Schepisi and Kavanagh take the film from documentary to a fabulist mode of narrative where the camera, as a naive spectatorial machine traversing spaces that are not actually crossed by the majority of the film’s protagonists, suggests a sense of equity that doesn’t exist in that workplace. That sense of equity is evoked in a number of ways, not least the ambient cheerfulness mentioned earlier. It is also portrayed through the relative ease that accompanies the making of a story into print, from the call to the journalist concerning a newsworthy item to the neat assemblage of print blocks within typesetting frames.

The editing and composition of shots serves to condense and simplify a process that might otherwise seem inaccessible to a viewing audience; by the same token, we are given to understand that useless as the machines are without human users, they dominate in spaces not dependent on intellect (the process workers on the shop floor simply do not occupy – and thus cannot lay claim to – their working space in the way that the journalists and editors may). The same can be said for the secretaries. In the cleanliness of the surfaces, the convenient proximity of rulers and cutting boards, in the composition that demands each piece of machinery be beautifully lit and framed, we are being denied a kind of truth. In this attempt to praise the blue-collar environment as one worthy of aesthetic and intellectual consideration, we are permitted only to see it in terms of what is deemed aesthetically valuable in the high modernist sense. The gleaming surface of the film serves to emphasise the ambiguity of its content but, in effect, seals the viewer from an engagement with the environment portrayed on its own terms. This effect is mirrored in the news feeds received in the office throughout the day: while riots, fires, war and racial tensions disrupt the high modernist harmony of the wider world, Melbourne exists as a sleepy town in which a break-in and an automobile accident make the daily news. As such, we might be inclined to view People Make Papers as a more effective social document of what it alludes to rather than that which it overtly depicts.